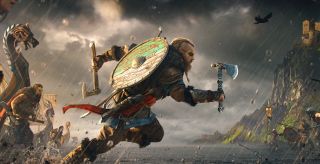 Bringing the news of video games is usually the job of E3, but with the new normal, it was cancelled. Ubisoft responded with a double whammy this week for one of their hits, Assassin’s Creed. Wednesday gave an 8 hour long hand photoshopped teaser poster from the amazing BossLogic, which at the end of the video announced the trailer which premiered Thursday morning. Now it doesn’t have gameplay, and it’s depicting Viking battles, so it’s not for the kids. Still, we’re going to see some unique gaming news and presentations this year.

All the details and the first trailer for Ubisoft’s upcoming Viking RPG: Assassin’s Creed Valhalla, set in 9th century England.