Yahoo news app, one of the last sources of Western news in China, is removed from Apple store amid censorship drive – DNyuz 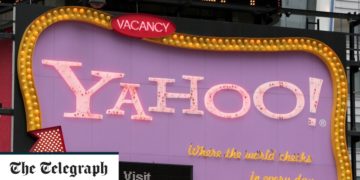 A section of our big blue ball has censorship to a level beyond the imagination of us here in the United States. The Yahoo news app is no longer available in China, and Apple and Yahoo are avoiding comments. This joins a number of new crackdowns against Olive Tree Bible, Holy Bible King James, and Quran Majeed. LinkedIn was even forced to shutdown in China in this draconian attack on freedoms and communication. It all started with small requests to not talk about the Dalai Lama, then to Tibet and Taiwan, and now just about anything is in danger.

Chinese internet users have lost one of their last avenues to foreign news after the Yahoo Finance app disappeared from Apple’s store, as the Communist Party intensifies its censorship of information from abroad.
The Yahoo app republishes news from foreign media organisations, including outlets whose websites are blocked in China, such as Bloomberg and Reuters, as well as stock market data.